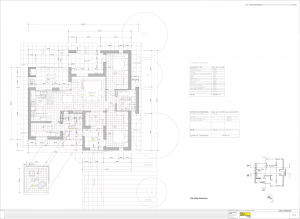 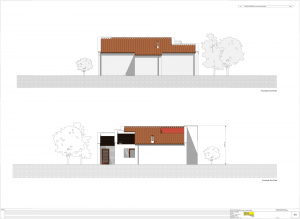 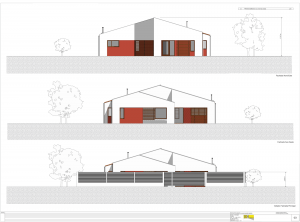 A contemporary house with swimming pool located within a housing estate to the south of the town of Roquetes, near Tortosa.
The client is a wheelchair-user so detailed discussions regarding her own personal adaptations formed an important part of the early stages of the design phase.

The house has a simple, open plan layout with two bedrooms but a generous living room and kitchen. We paid close attention to the way that the kitchen was to be used by the client, a keen cook and ex-chemist whose kitchen was going to become her new laboratory.
The external envelope is constructed with load-bearing aerated clay blocks or ‘termoarcilla’. The roof is formed with exposed laminated timber beams and a sandwich panel with plasterboard soffit. The external finish is a ‘monocapa’ lime render.

There are two shaded terraces to the south-west facing rear of the property which form a buffer between the inside and outside of the house. Along the entrance façade too, there is a layering of spaces so that the main living area feels very private, but with views out to the garden where care was taken to preserve as much as possible of the existing mature trees, increasing furthermore the shade available in this extremely hot part of Catalonia.

A highly efficient air pump system was installed with low temperature radiators which incorporate fan-coils and can also serve to help cool the space during summer months.